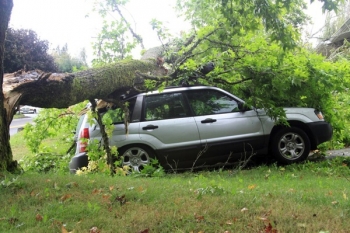 A windstorm knocked down half of this ash tree, but the homeowner found a company to quickly address the issue. (Photo courtesy of Angie’s List member Larry D. of Vancouver, Wash.)

When a windstorm toppled down half of Larry D.’s ash tree onto his car on a Sunday afternoon — and left the other half of the tree standing precariously — he was afraid he wouldn’t find a tree company to come out.

“I was very worried about it,” says Larry, an Angie’s List member from Vancouver, Washington.

But Larry called highly rated TreeWise, also in Vancouver, and talked to the owner, Scott Clifton, who was shopping with his wife.

“[fusion_builder_container hundred_percent=”yes” overflow=”visible”][fusion_builder_row][fusion_builder_column type=”1_1″ background_position=”left top” background_color=”” border_size=”” border_color=”” border_style=”solid” spacing=”yes” background_image=”” background_repeat=”no-repeat” padding=”” margin_top=”0px” margin_bottom=”0px” class=”” id=”” animation_type=”” animation_speed=”0.3″ animation_direction=”left” hide_on_mobile=”no” center_content=”no” min_height=”none”][They] dropped everything to get over to my house,” he says. “They were there within 15 minutes of my call. He assured me the remains of the tree weren’t going to fall right away, and had his crew there within an hour to clear the down section.”

A day or so later, TreeWise returned to remove the rest of the tree and grind the stump. Larry says the workers were friendly, professional and had all the necessary equipment.

They also left a lasting impression on Larry’s neighbors.

“They did an amazing job cleaning up the debris,” he says. “My neighbors enjoyed watching and referred to their climber as the tree ninja.”

Larry called TreeWise again to prune a cherry tree, which he says was also done to his satisfaction.

“I’ll be using them for any and all tree work in the future,” he says.