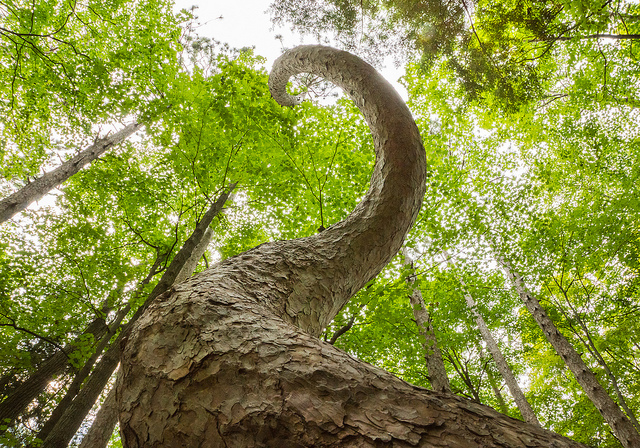 In 2006, while hiking on a trail through the woods, we came across this tree. It was in the middle of the trail, so we weren’t the only ones who’ve seen it. But I’m guessing most people didn’t look at it from the angle I photographed it, so they wouldn’t realize the cool curve of its growth.

I took a few photos of it. Sometime after that, I posted my best photo of the “Crooked Spine Pine” on Flickr. (That was before I had this blog.) It turned out to be one of the most popular photos I’ve ever posted. A number of people questioned its authenticity – accusing me of “photoshopping” it.

Back when I took the original photo, in 2006, I had a simple 5-megapixel camera. The photo of this tree was unique, but it really wasn’t a great image, technically speaking. Since then I’ve upgraded considerably.

For the last several years, I’ve been trying to find this tree again – to get better photos. However, I wasn’t sure exactly where it was. I thought it was at Potawatomi State Park, near Sturgeon Bay, Wisconsin. We spent a number of visits, hiking the trails looking for the tree. After having no success, I began to think maybe it was on a trail at Peninsula State Park, farther up Door County, nears Sister Bay, WI. We had hiked trails and took photos at both parks. We also had to consider the possibility that the tree was no longer there – blown over in a storm or claimed by disease or insects.

We began to keep better track of what trails we had hiked on and in the process, we’ve hiked a lot of trails and even enlisted the help of friends, in search of this one tree. Recently, my wife and I spent a day hiking the trails at Peninsula State Park totaling about seven-and-a-half hours. No luck. So, maybe it wasn’t at Peninsula, but at Potawatomi.

Last Friday, Sara (my wife) and I decided to spend the day together. It was a nice day so we decided to hike the trails at Potawatomi State Park. We hiked the Hemlock Trail – about a two mile loop. While hiking, I noticed a spur off the trail and thought we should check that out some time. Hemlock turned back and we came along another spur that I thought might be the other end of the spur we passed earlier. We decided to head up that little stretch to see what was there and, low and behold, there was the tree.

In our search over the years, no doubt we had hiked the Hemlock Trail before, but never took that little detour. We were joyful to have finally located it, took photos, marked it on a trail map, took GPS coordinates. We will not have any problems finding it in the future. If you’d like to see it for yourself, hike the Hemlock Trail and take the bike trail that in the northern part of the loop.